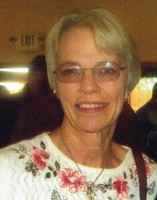 Patricia Mae McMeans, age 64, passed away January 7, 2016 at the home of her son in Prosser. Pat was born in Sunnyside on September 22, 1951 to Jack and Avis Cranford. She received her education in Sunnyside and graduated with class of 1970. Pat married Jerry Raver in 1970 and they had two sons, Jeffrey Lee Raver and Scott Allen Raver. Pat worked numerous jobs in Sunnyside and Grandview, including real estate and at the Sunnyside livestock sale yard. Pat married Bill McMeans October 16, 1997 in Sunnyside. Together Pat and Bill trained and owned race horses at numerous race tracks around the northwest. Pat enjoyed doing embroidery, painting, gardening and canning. Her greatest joy was spending time with her grandkids and good friends.

Memorial Service were held Wednesday, January 13, 2016 at 2:00 pm at the Smith Funeral Home Chapel in Sunnyside, WA.  Those wishing to sign Pat’s online memorial book may do so at www.funeralhomesmith.com. Smith Funeral Home Ltd. and Crematory in care of arrangements.